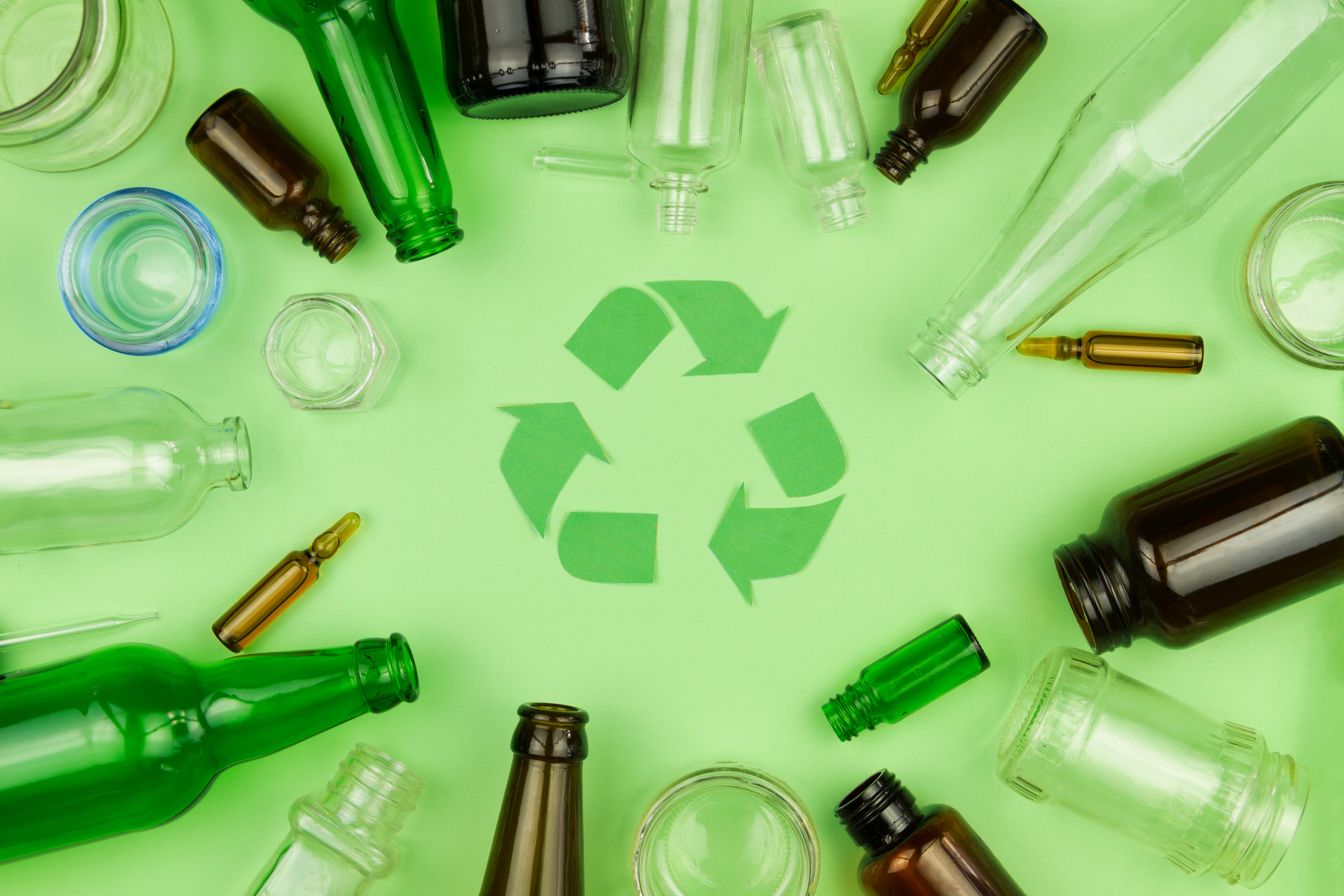 Other Communities are Giving up on Glass Recycling: Here’s Why We’re Not

When China announced in 2018 that it would drastically restrict its importation of foreign materials, the international recycling industry was thrown for a loop. The upended market prompted the suspension and reduction of municipal recycling services across the United States and generated a lot of hand-wringing about whether recycling was still worthwhile. Recycle Ann Arbor’s answer is an emphatic yes, if you recycle right. The problem isn’t recycling itself, but a recycling industry that’s been damaged by corporate greenwashing, bad public policy, and inadequate consumer education.

RAA is gearing up to revitalize Ann Arbor’s recycling program, starting with rebuilding our local Materials Recovery Facility (MRF) into a cutting-edge facility driven by a zero-waste ethic. For a zero-waste recycler, long-term economic viability is important, but short-term profit isn’t the goal: what’s really important is protecting the health of living beings, mitigating climate change, and saving valuable resources. With those values on the line, a zero-waste community doesn’t give up when it hits a stumbling block.

One of the materials that’s been challenging for the industry to deal with is glass. While 60 communities across the country suspended curbside recycling programs entirely in the last two years, about 75 more maintained programs but stopped collecting glass, citing high costs or lack of a market. It doesn’t have to be this way: handled properly, glass is a great recyclable, environmentally and economically.

Here’s what you need to know about how glass recycling works, the challenges that exist in the American glass recycling industry right now, and how RAA plans to recycle glass to its highest and best use with your help.

From a zero-waste perspective, glass is one of the best recyclables there is. Thanks to its physical properties, it can be melted down and remolded endlessly without degrading in quality, unlike many other materials. It doesn’t leach toxic chemicals like phthalates, PFAS, or BPA, as many plastics do. And because of the intense resource and energy requirements involved in making new glass, recycled glass products can often be made at a lower cost than it would take to extract and process raw materials.

When virgin glass is manufactured, it’s nearly always made up of three core ingredients: sand (mostly silica), soda ash, and limestone. The sand makes up the bulk of the glass; the soda ash lowers the silica’s extraordinarily high melting point of 3090 degrees Fahrenheit; and the limestone stabilizes the mixture so that it doesn’t dissolve in water. Nearly all new glass containers include at least some recycled glass, as well, because of the operational cost savings and quality enhancements it offers manufacturers.

When you recycle your bottles and jars, the used glass gets separated from other materials, usually sorted by color, and then crushed into a coarse, furnace-ready grit called cullet. Making new glass in part or in full from recycled cullet substantially reduces the materials and energy costs of glass production. One kilogram of cullet replaces 1.2 kilograms of raw materials, and for every 10% of cullet in the starting mixture, the energy demands of the furnace drop 3%. Cullet also more easily produces a higher quality product, with less likely formation of bubbles, crystals, and other imperfections than raw materials being melted and mixed for the first time.

Cullet also delivers a critical environmental benefit of reduced climate impact through lower greenhouse gas emissions. Most of that comes from reducing furnace energy requirements, but climate benefits accrue across multiple dimensions of the process. Melting limestone into new glass produces carbon dioxide as a byproduct, for example. For every 6 metric tons of cullet used instead of a raw mixture, 1 metric ton of CO2 emissions can be saved.

But despite the array of advantages recycled glass production offers, glassmakers in the U.S. have a hard time getting as much cullet as they would like at a reasonable price. The U.S. currently sends most of its glass to landfills, recycling only 33% of the more than 10 million metric tons it uses each year. Americans also think that they’re recycling more than they actually are: 60% of glass thrown into single-stream recycling collection bins doesn’t actually get turned into new products.

This shortfall isn’t caused by insurmountable challenges. Although the U.S. recycling rate for glass has remained relatively stagnant for the past 25 years, countries like Spain and the UK have doubled and tripled their recycling rates in the same time span. A few, such as Germany and Switzerland, have attained a 90% return rate on glass recyclables.

The countries that have attained high nationwide recycling rates share something in common: companies must pay for the reuse and/or disposal of the products they make. American companies and policymakers, however,  remain resistant to rethinking our manufacturing and waste economy in a way that prioritizes the protection of our environment and the conservation of precious natural resources. Manufacturers refuse to take responsibility for their products and packaging, and lawmakers aren’t demanding that they do with refillable programs or with large-scale accountability for the recycling process. Glass is endlessly recyclable, but only the very cleanest glass can be recycled back into glass containers. The food and beverage industry has worked to project a green image without actually committing to sustainable practices. Corporations have lobbied for single-stream recycling collection to make it easy for consumers to recycle their products’ glass packaging and to feel good about it. But, on the other end, the same companies complain about the quality of the single-stream materials and balk at the cost required to clean glass to the high caliber necessary to make new recycled containers.

The problems are fixable, and the challenges are well worth it to overcome. Recycle Ann Arbor strives to make the most of our planet’s resources by recycling glass into the highest and best use, and here’s how. 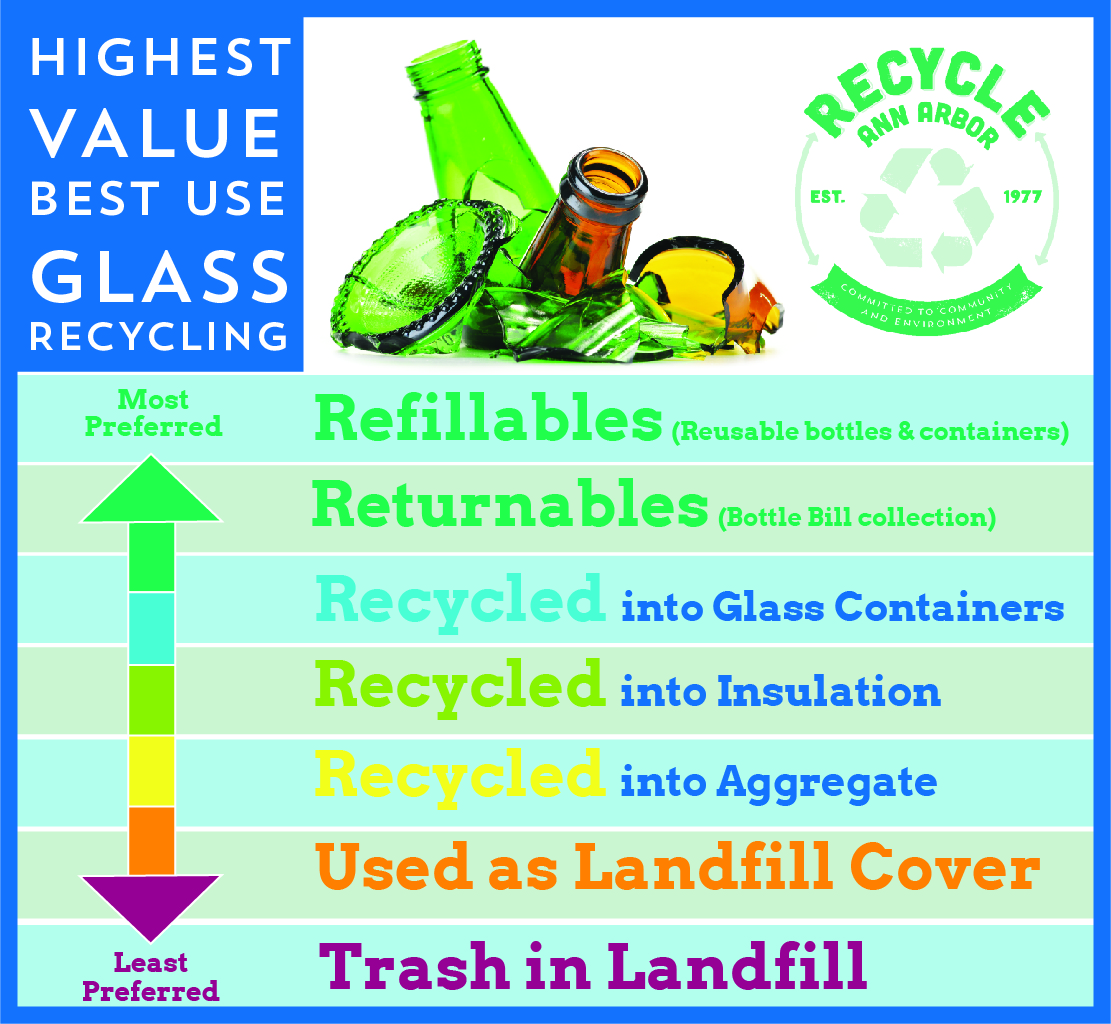 The best practice is to reduce production and consumption first, only recycling what’s necessary. The gold standard for reclaiming and reusing glass, in a circular economy, is to implement refillable glass packaging and programs. Unfortunately, these programs have been unsupported and largely opposed by producers in the U.S. But in Europe, they are building upon past success, including a history of longer resistance toward the trend of the single-use packaging in the first place. There are many successful examples of reusable packaging programs worldwide, and a market analysis by the Ellen MacArthur Foundation observes that “return on the go” models, where customers bring back dirty refillable containers at a drop-off point, such as the grocery store, “can substitute most single-use packaging without changing the fundamental purchase situation.”

The second best option in the highest value, best use hierarchy is to set up a beverage container deposit system. “Bottle bill” laws make glass recycling better in two key ways. First, they incentivize recycling by putting a price tag on it. Second, they generate a cleaner, less contaminated stream of recyclable glass. Michigan has one of the oldest and strongest “bottle bills” in the U.S.: Michigan returned more than 90% of its deposit bottles and cans for recycling until 2018, when the number dipped slightly, to 89%, in the wake of China’s policy change.

If you can’t reuse your glass or return it under the bottle bill then the next best option is to put it in your curbside recycling. Make sure that the glass (bottles and jars only--no pyrex or porcelain) is rinsed, and check and that you haven’t thrown non-recyclable items into your bin. Unfortunately, some of the glass that is sorted out of single-stream collection at the Material Recovery Facility doesn’t meet the quality specifications to be recycled into glass containers, but it can be put to other uses. Moderately contaminated recycled glass is often used in construction for aggregate in road beds and decorative concrete or for fiberglass insulation. Highly contaminated glass can be used as landfill cover, which is better than nothing, but far from ideal.

Recycle Ann Arbor ensures that the clean glass returned to us is honored as a valuable commodity. When RAA was first contracted to transport our community’s recyclables elsewhere for processing in 2017 after the shuttering of Ann Arbor’s privately-operated MRF, RAA chose a partner with a one-of-a-kind glass processing plant in Dayton, Ohio. Rumpke is the only recycler in the U.S. to operate its own integrated glass processing facility, able to purify broken and mixed glass. This has ensured that Ann Arbor’s glass recyclables receive the highest standard of pre-cleaning, allowing them to be sold and put to the best possible new use, rather than going to the landfill as trash or as cover.

It is Recycle Ann Arbor's mission to see that Ann Arbor's glass is recycled into the highest value and best use while the new MRF is under construction and after it goes online in fall of 2021. During the construction phase of the MRF redevelopment, all recyclables, including glass, will be shipped to another MRF for processing. That glass will be used for aggregate or insulation and could, depending on its condition, be used as landfill cover. As soon as Ann Arbor’s new state-of-the-art MRF is fully operational, and RAA is processing all of the recyclables, the glass will be marketed to make new glass containers, and a small amount of non-conforming material will get used as aggregate/insulation, depending on the quality. While RAA is investing in the best technology to sort the glass, we can only reach its highest value and best use with your help.

Recycle Ann Arbor can’t close the production loop without our whole community pitching in and learning to recycle right. We’ll be working hard on zero-waste education and outreach, and you can help by recycling your glass bottles and jars, keeping non-recyclable glass and other non-recyclable items out of your recycling bin, and teaching your family and friends why it matters to rinse their glass containers, too. And as you take the time to clean and sort, know that your everyday actions matter in our urgent existential fight against the climate crisis and that your effort is helping to preserve precious natural habitat that would otherwise be disrupted for resource extraction.

Get Updates from Recycle Ann Arbor

with your help
15699
tons
diverted from landfill
through recycling
thank you for recycling with recycle ann arbor, a 501(c)3 non-profit