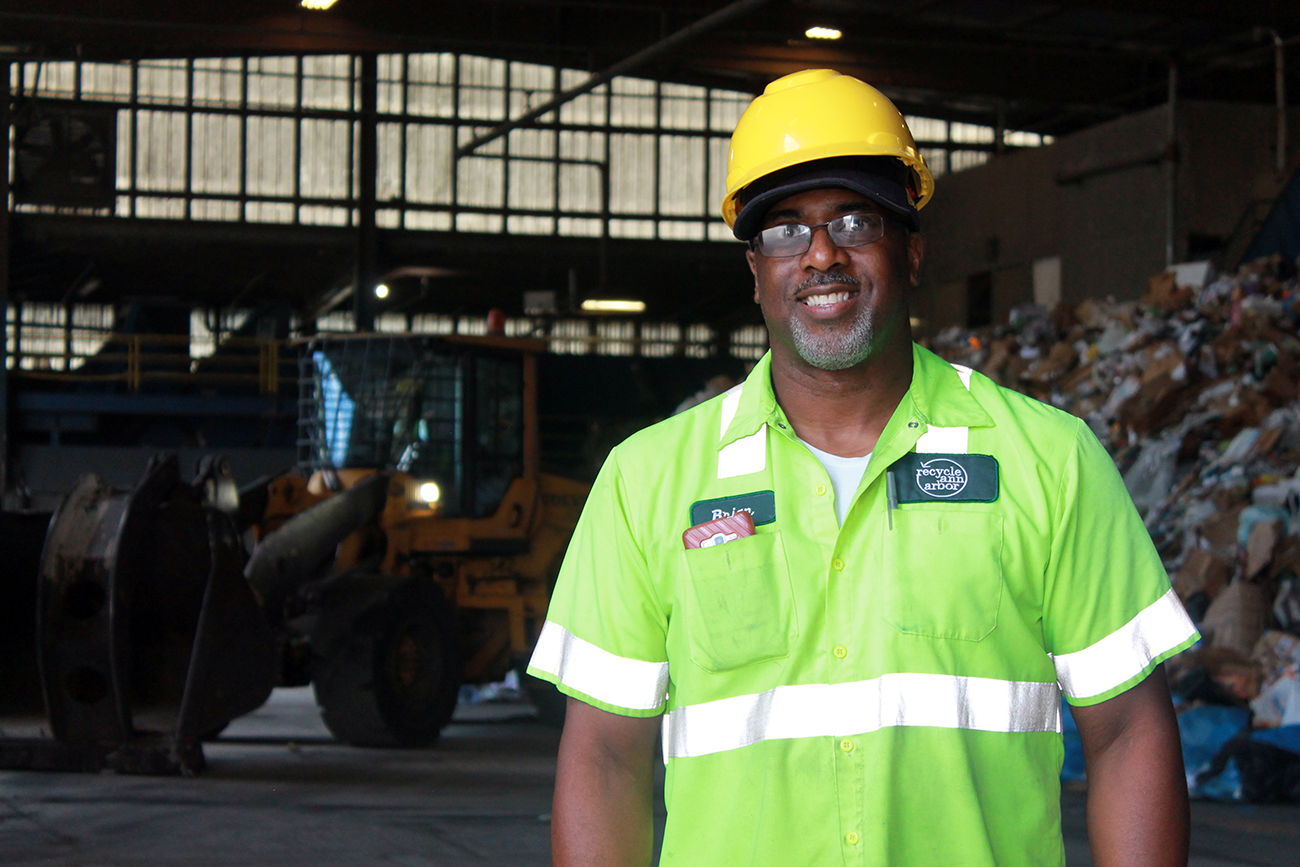 Why a Local MRF Operated by a Community Based Recycler Matters

Unfortunately, City staff are recommending Emterra, a Canadian company's proposal, to transload Ann Arbor's recyclables to a facility that they’re planning to build near Lansing. On Monday, Dec. 2nd, Ann Arbor City Council will decide to either approve the City staff recommendation or not. We believe strongly in the merits of our proposal to rebuild the MRF and reinvest in Ann Arbor's recycling program.

RAA’s plan to process & sort materials locally is better for the environment.

Expending energy and money to haul materials to Lansing for sorting and processing is worse for both the environment and the local economy. The City of Ann Arbor recently issued a declaration of a climate emergency, and established a goal of community-wide carbon neutrality by 2030.  If that’s the goal, the City should definitely not be sending trucks of recyclables 70 miles away for sorting.

Restoring our capacity to sort and process recyclables locally will help ensure the highest quality end materials. As a community-based recycler, our purpose is to help Ann Arbor reach its zero waste goals.

The Emterra proposal would result in Ann Arbor’s plastic film all being burnt in an incinerator. Burning plastics in an incinerator destroys a non-renewable resource and creates toxic emissions that harm the environment and human health. Ann Arbor actually recycles the plastic we collect by sending to TREX where it is made into decking. Emterra’s proposal would have Ann Arbor’s glass bottles all be reduced to the lowest value of roadbase. RAA sends our glass bottles to get recycled back into glass bottles or insulation, both of these are a much higher use than roadbase.

Our zero waste mission drives us to seek out the best possible end markets, those that are recovering the highest percentage of materials to the highest and best use. We also believe in transparency and actively educate the community on best practices. Zero waste education, transparency, and mission-based decisions differentiate us from large corporations that answer to shareholders or owners, not the communities in which they operate.

RAA’s plan to rebuild the MRF is better for our local economy.

Rebuilding our MRF will provide local union jobs, and the money spent operating such a facility will contribute to the local economy to a greater degree than if Ann Arbor contracted with a MRF in Lansing.

According to the Institute of Local Self Reliance study done in 2016, "Why Local Matters," small-scale, locally owned businesses create communities that are more prosperous, entrepreneurial, connected, and generally better off across a wide range of metrics. For example, a study done in Portland, Maine, showed that every $100 spent in locally owned businesses contributed an additional $58 to the local economy. By comparison, $100 spent at a national company yielded just $33 in local economic impact.

The RAA proposal protects the City if recycling commodity values drop as they did in 2009 and again this year– the City is protected in ALL market conditions and is paid on the published index, which cannot be manipulated. Additionally, RAA will pay for all upgrades needed to rebuild the MRF.

RAA has been awarded an $800,000 State of Michigan grant, and has secured reliable national and local private financing to rebuild the unutilized Ann Arbor MRF. The funders are experts in the field of recycling and risk assessment and they have found this proposal worthy of significant funding. They have full faith in the project and in RAA and are confident about receiving a return on their investment. 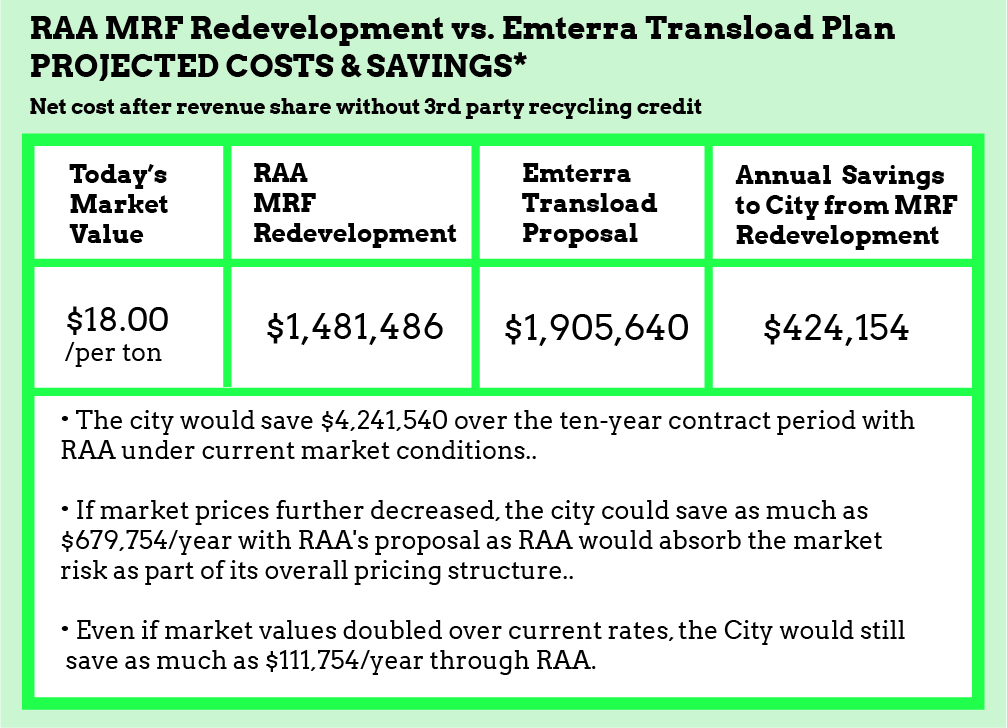 Rebuilding and Reinvesting in a local MRF is a sustainable approach that looks out for the future of Ann Arbor and the surrounding region’s recycling program.

Both the Washtenaw County Solid Waste Plan and the Governor's Recycling Council have expressed the need to increase regional processing capacity to align Michigan's recycling rate with model states who achieve much higher rates currently. The GRC stated in its 2017 report that many of the materials presently ending up in landfill or incinerator could be recycled or composted with better infrastructure and education.

By sending its recyclables to Lansing, Ann Arbor would displace recycling tons from surrounding communities in the Lansing area and force other eastern Washtenaw communities and haulers to ship their recyclables to the Detroit area or more distant locations in Ohio and western Michigan.

Redeveloping the Ann Arbor MRF provides an opportunity for the City Council to move the community closer to its 2030 carbon neutrality target, whereas the alternative plan would be a step in the wrong direction.

We believe that a locally owned and operated MRF provides the best stability and flexibility to the City, which will help Ann Arbor reach its sustainability goals. The MRF redevelopment is also vitally important for capacity in this region. Profits are reinvested in the local community, increasing reuse, providing for construction/demolition waste recovery, offering recycling education programs, and creating other cutting-edge zero waste programs for our community.

Get Updates from Recycle Ann Arbor

with your help
15699
tons
diverted from landfill
through recycling
thank you for recycling with recycle ann arbor, a 501(c)3 non-profit